The Financial Crisis and its Story: 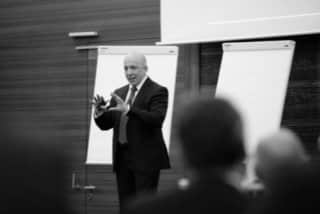 The financial crisis:
how it started – and why it isn’t over yet.

The financial and economic crisis has held the world in its firm grip for years. How did it come to be? What were the real origins? Why can’t politicians find a solution? What should we prepare for? Can

we hope for a happy end or is there still worse to come? The uncertainty is aggravated by the failure of politicians to give citizens clear and understandable explanations for the crisis, for the advantages or disadvantages of a monetary union or for how their rescue programmes are meant to work.

In contrast, this lecture tells the whole story – starting with the origins of the crisis and explaining whether we can expect a happy end and showing what we need to do to reach it. (Based on the German book by Daniel Stelter, Veit Etzold & co-authors: ‘The Trillion Debt Bomb’; in German: “Die Billionen Schuldenbombe – Wie die Krise begann und warum sie noch lange nicht zu Ende ist“).

Find out more in our English essays “The Emperor is naked, part 1 and 2” in the European Financial review.